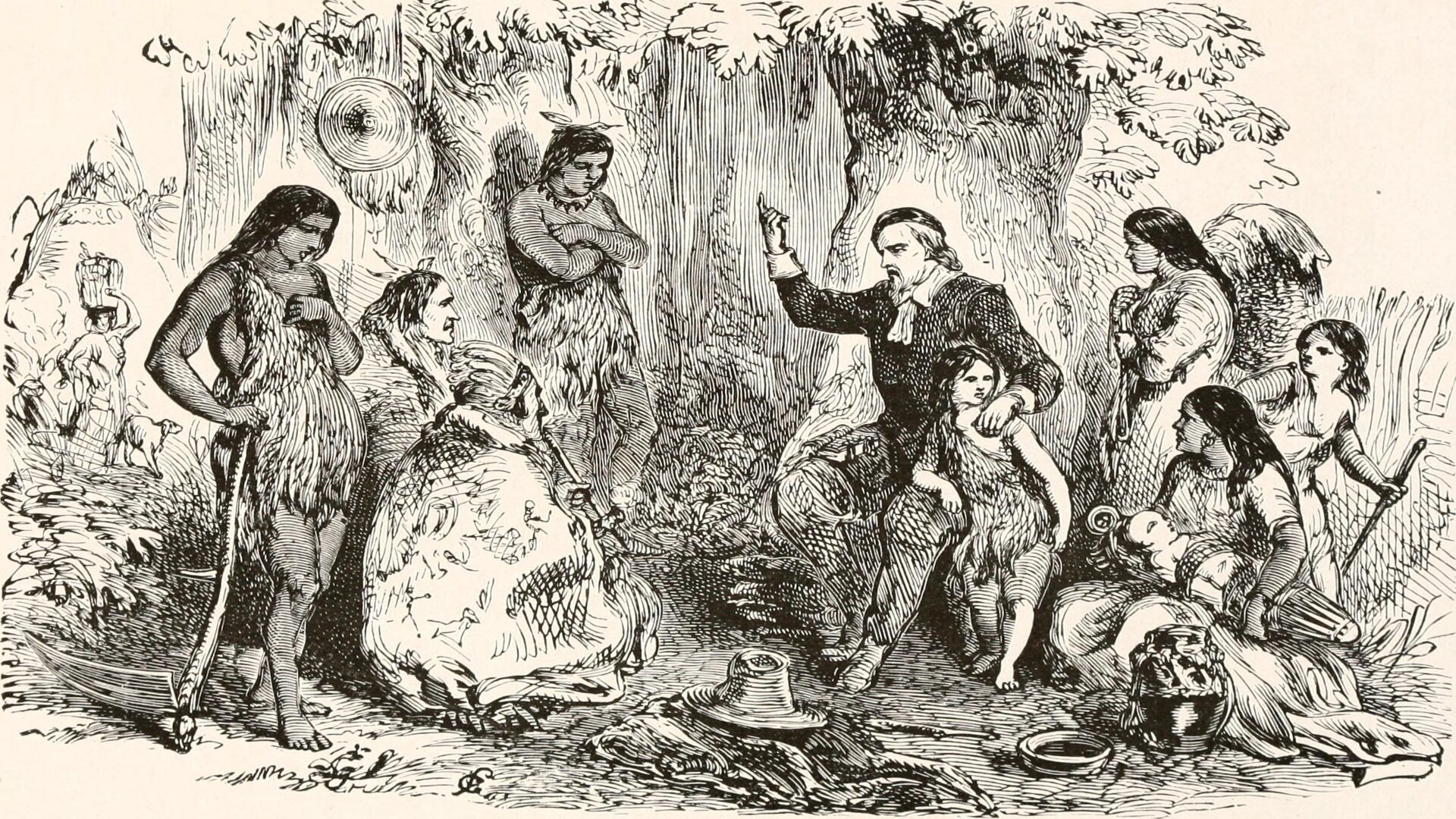 31 Oct The Word among the Wigwams: John Eliot and Native American Missions

Posted at 15:06h in Articles by Joshua Kellard 2 Comments

Joshua Kellard introduces John Eliot, the Cambridge graduate whose work as a translator and missionary visionary in 17th century New England was well ahead of his time.

Jesus College, Cambridge, with its 12th Century chapel, cloistered courts and sleepy wooded surroundings, does not seem a likely springboard for a globe-trotting missionary pioneer; certainly not one who would find it necessary, just 10 years after leaving his college, to abandon the Church of England and seek a new life in a young colony perched on the edge of the world then known to his people. But appearances can be deceptive, for this is the path that John Eliot was to take.

Born in Widford, Hertfordshire, in 1604, John was the third child of Bennett Eliot and Letesse Agar. Being a yeoman and possessed of some lands, Bennett Eliot was able to send his son to Cambridge as a pensioner (fee-paying student), and he graduated BA in 1622. He narrowly missed being contemporary with Oliver Cromwell (who left in 1617) and John Milton (who arrived in 1625), but would have been aware of the poet George Herbert, who held the chair of University Orator from 1620 to 1627.

While little is known about the years which followed his time at Cambridge, Eliot became involved with the school-cum-seminary of Thomas Hooker in Little Baddow, near Chelmsford in Essex. Because of his nonconformist views, Hooker soon faced the prospect of legal action from the Bishop of London, William Laud, and fled to the Netherlands, closing the school and leaving Eliot suddenly without employment or mentor. While it is impossible to trace Eliot’s thought-process at this point, his departure for America the following year needs to be seen against the backdrop of the increased persecution of nonconformists within a Church of England increasingly influenced by Laud.

On the 3rd of November, 1631, after a 10-week journey aboard the Lyon, Eliot arrived in Boston, desiring ‘to enjoy the holy worship of God… according to the Word of God … without human additions and novelties.’ (R. Cogley). After a temporary appointment as pastor of the First Church in Boston, he became ‘teacher’ or ‘under-pastor’ at Roxbury, a church he would serve for the remainder of his life. While Eliot would go on to make substantial contributions to missionary work, his achievements, whether as a school founder, community builder or Bible translator, would always be carried out alongside his pastoral duties at Roxbury.

In the early decades of settlement in the Massachusetts bay area, few ministers looked to the spiritual needs of the neighbouring natives. Eliot appears to have been only the second prominent minister, after Roger Williams, to see the need for the good news of Christ to be communicated to the ‘Indians’. Indeed, it took even Eliot some time to get going: his first attempt at preaching to native Americans took the form of a sermon given in 1646, 15 years after he had disembarked in the ‘New World’. The results weren’t spectacular, and he returned to Roxbury discouraged by the negative response of his hearers. His second try proved more encouraging.

On the 28th of October, 1646, he went with three others to the wigwam of Waaubon at Nonantum (now Newton, MA). They met a company of Indian men, women and children, who had gathered from the surrounding area. After praying in English, he preached to them (whether in Indian or through a translator is not known) and fielded a vast array of questions, which revealed the thoughtful, sincere spirit of his listeners. After a meeting of three hours, Eliot resolved to depart while his listeners still had an appetite for more. Having made plans for a second gathering, the party distributed apples to the children, tobacco to the men, and headed back to Roxbury.

This was to prove the memorable start to Eliot’s lengthy ministry among the Native Americans of Massachusetts. Soon, communities of ‘praying Indians’ were established, who gathered into townships and were encouraged to order their lives towards the glory of God and the common good. Eliot was concerned to see to it that these communities had schools and churches of their own, and were encouraged towards self-sufficiency. From the early 1650s, beginning with Natick, 14 such townships were developed in the Massachusetts colony alone. It is thought that upwards of 4000 Indians lived in them, with at least 1100 confirmed as being ‘obedient to the Christian gospel’. While some may be tempted to cynicism, seeing in these townships a sort of embryonic reservation, the reality doesn’t allow us such an easy comparison. Strikingly, Eliot’s support for the towns was an outflow of his desire, shared by many fellow colonists, to order society in the light of the Bible. He encouraged the Indians towards the same form of life to which the colonists themselves aspired. Furthermore, he was not a segregationist in any sense. Indeed, later in life he was to found a school in Jamaica Plain which educated English, African and Indian children together. We must also bear in mind that by this time, after the travesty of the Pequot War (1636-1638), Eliot would have realised the real dangers faced by Indian communities which were spread out and undefended.

The townships were short-lived, however, most of them falling prey to the ravages of King Philip’s War (1675-78). Sadly the ‘praying Indians’ were often treated appallingly both by their own people, and by English settlers who suspected them of having spurious motives for their transformation.

Perhaps John Eliot’s most tangible legacy is what he left behind in writing. Together with Richard Mather and Thomas Weld, he authored the first book to be printed in New England: a book of metrical Psalms known today as the Bay-Psalm Book. As his ministry interests turned towards serving the Indians, he put his linguistic ability to good use, producing a work in Algonquian, a catechism called The Indian Primer, in 1654. He would go on to release a translation of Genesis in the Massachusett language, followed by the New Testament in 1661, and the whole Bible two years later. This ‘Massachusett Bible’, the first in any Native American language, was the first Bible of any sort to have been printed in the Americas. Through his preaching, advocacy and translation work, Eliot revealed a consistent and wholehearted commitment to sharing his Christian faith with the Native Americans in the Boston area. His example would inspire even more evangelistic endeavour. Among other admirers was the ‘father of modern missions’, William Carey (1761-1834), who listed Eliot alongside the Apostle Paul and David Brainerd as personal missionary heroes.

These days it is hard to find an audience receptive to the idea that there might be any good found in the heart of a Puritan-era missionary to Native Americans. We are discussing, after all, a period of sporadic but increasing violence between European settlers and natives, of land-grabbing, manipulation and unjust deals. With damning hindsight we know that all of this was destined to lead, tragically and irreversibly, to the destruction of entire peoples and cultures. Nevertheless, to view John Eliot as a purveyor of a toxic foreign culture and reduce his missionary efforts to a power play blinds us to the man himself. The facts, as far as they are known, suggest that his motives, methods, and even, in great measure, his achievements were part of a silver lining of genuine interest in the wellbeing of Native Americans. Sadly, it is a silver lining which is often eclipsed by the dark clouds it was framed against, clouds which are magnified by the current compulsion to focus on historical injustices. Eliot’s life and work stand as a reminder that it is not enough to paint the English settlers as the ‘bad guys’ without nuance. The lives of those settlers who devoted considerable energies to serving and representing Native Americans stand as testimonies to the richer, more complex texture of the colonial American story.