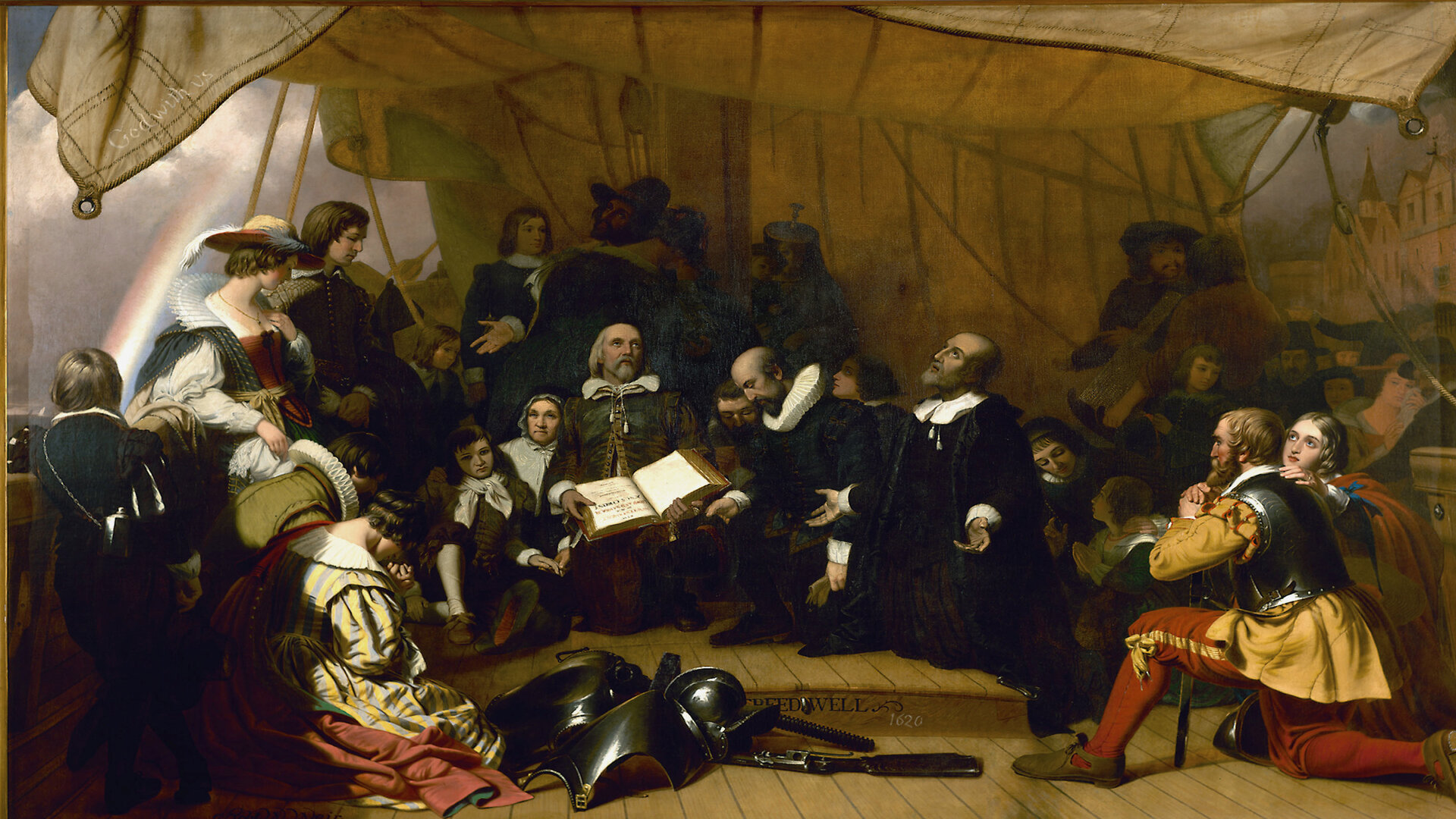 21 Oct All At Sea About the Mayflower

Posted at 14:29h in Articles by Christian Heritage 0 Comments

The year 2020 was meant to be the big commemoration of the 400th anniversary of the sailing of the Mayflower but Covid had other ideas, and so the mass events and supposed millions of American tourists have never happened.

This is not to say that nothing has happened. What has filled the void is a host of people who have used the occasion to float their own ideas with little regard to the motivating issues of Christian faith and worship that caused Carver, Brewster, Bradford et al to set sail in the first place. Various places in England have jostled for the dubious position of being the most ‘significant’ in the story, and various causes have shouted themselves hoarse to turn the Mayflower story to suit their own purposes. Issues like the persecution of Native Americans and Slavery have been thrown into the mix (somewhat illogically, as they came later) whilst in America there is always controversy to be had over who had the first Thanksgiving or the importance of the Mayflower Compact.

The story, in its bare details, is rather simple: a small bunch of rather homeless people who wanted to worship God in their own style risked everything on a voyage and settlement effort which they were badly equipped to attempt. They did so because they had been persecuted in England and the Netherlands, and by 1619, their prospects there seemed bleak.

This was at a time when only the radical Anabaptists, whose reputation had been much besmirched, proposed a separation of Faith from State. The idea that a civil magistrate or town mayor should have some power to regulate matters of belief and worship was anathema to them, but seemingly common-sense to almost everyone else. Ironically it was the congregation from Gainsborough with whom the Pilgrims – who were mainly linked to Scrooby – had fled to the Netherlands, who then most enthusiastically embraced the idea of separation of Church and State and with it endorsed the even more radical step of arguing against any form of legal regulation of religion.

John Smyth, Thomas Helwys and John Murton had all written influential material on religious liberty by the time the Mayflower set sail in 1620. All three became Baptists and transmitted their ideas through Roger Williams, Sir Henry Vane and others to the First Amendment of the American Constitution. They were unique in proposing freedom for Jews, ‘Turks’, and indeed everyone else, although they still considered it to be certain that those who chose the wrong path would surely suffer eternal punishment. Others like George Fox enthusiastically endorsed their view of separation, hence the problems Quakers had when taken to court. From the 1630s, when neighbouring Massachusetts had been settled by others of a more conservative view, Williams, Anne Hutchinson and later the Quakers became the lightning rods for an attritional war on the issue of religious freedom. Massachusetts executed people for religion decades after England had ceased doing so. Williams’s Rhode Island, by contrast, took the path of freedom and tolerance.

Over time the Mayflower Pilgrims have become loaded down with what others require from them, seemingly linked to a North Vs. South debate to prove pre-eminence in the development of the United States – hence the arguments over the first Thanksgiving or the importance of the ‘Compact.’ Certainly also, the Mayflower’s company included many ‘strangers’ who were not part of the godly community and did not share the same motives. But strip away all that came after and you have a small group of families risking all to establish a new life away from the risk of religiously-based persecution.

Sometimes only the persecuted themselves can really see this. I found a most powerful example of it not while working on Christian history, but whilst researching my book European School Inspection and Evaluation. In 1933 the new Nazi Government in Germany was seeking to impose its own values on all schools, including private schools run by Christian communities. The Brüderhof community’s school in Fulda district received an extra visit from Dr Hammacher, the district inspector, in December of that year. Although he had previously seemed favourable, now he was critical. Pupils were asked additional questions about Hitler’s life which they could not answer, and then, as their teacher recalled it, they were told to sing a Nazi song:

‘We don’t teach our children street battle songs,’ I answered.

He then went on to other subjects. The last one was English, and the children had to read from their exercise book. Quite by chance I opened the book to a short account of the Mayflower, the ship that carried the Pilgrim Fathers to North America in 1620. These people had left England and emigrated for conscience’s sake. It was strange – we had the feeling we were confronted by something revolutionary, something beyond our grasp. I felt that this school inspector was moved too.

At the end of the last test the inspector shook hands with every child and drew some small object out of his pocket for each of them: an interesting pencil, a little notebook, a little ruler, an unusually shaped eraser, a pencil sharpener in the shape of a globe. He then left us quietly, without any Heil Hitler.

We continued our classes until the Christmas holidays. Each day began with the mute question, ‘Will this be the last day of school?’

In a recent radio interview, I was trying to explain the issue of religious freedom and the contribution of the Gainsborough congregation to the development of the idea. ‘Well, that’s not really something we have to worry about these days is it?’ the presenter observed – in a week of more reports from west Africa of Islamist violence and, closer to home, of concerns in Scotland that new legislation could be exploited to take action against churches.

Despite the predominance of Covid, faith-based persecution remains one of the most important issues in the world today. The Mayflower Pilgrims, with all the baggage stripped away, were motivated entirely by their desire to worship God in their own style and had suffered accordingly. As such, they are a most potent symbol for millions who have suffered similarly and continue to do so. In this of course they are far from exceptional, nor was their suffering especially extreme. A humdrum group of modest people from an unexceptional part of England, it was only the subsequent events that conferred an aura about them, but these events have also ironically weighed them down with other people’s baggage.

As with so much of our Christian heritage, it is down to Christians to make sure that the faith behind it all is not squeezed out. It is hard for post-Christian people, alive at a time when faith seems the preserve of relatively few in the West, to give it its due in history. That’s why we have to keep telling the story.

You can order Adrian’s latest book from his local, small-town bookshop here.